Breaking the laws of user interface design is a major talent of mine.  It's always the last thing on a developer's mind, and one always longs for the days where the primary problem is how something looks.

With that said, here's the start of the interface with a few extra bits: 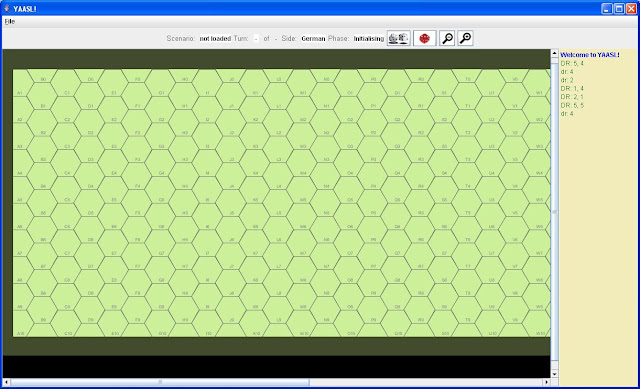 So - we now have a scrollable, zoomable lettered/numbered hexgrid, some functional dice buttons and the beginnings of a log window and information bar.

Next up is to to define a basic scenario (and I do mean basic!) - and have the interface accept moves, through to completion of the game.

So - by next time we'll see a couple of squads, a way of moving through the turn sequence and a resolution window.

The rate of return at this stage of a project is always high.  It's the fun stage.  Big looking things ("a map" - "a dice roller") are trivial in comparison to figuring out the mechanics of how bypass movement or the interface for defensive fire will be implemented.  Keeping up that kind of energy required is near impossible when you don't see the instant gratification of a major functions spring to life so it's important to take small steps and to set realistic goals.

Don't throw away your stuff just yet!
Posted by Dave at 17:16

Email ThisBlogThis!Share to TwitterShare to FacebookShare to Pinterest
Labels: YAASL