An Englishman in Newark...

I know I have to adapt.  I know I must be respectful of other cultures.

But really.  Look at this: 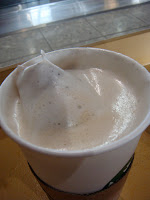 This is a cup of tea! It's frothy and the tea-bag won't sink.  It's exactly the type of place my mother warned me about.  The worst thing about it? It was made in the UK! Heathrow airport, in fact. If the Queen could see this now...

To take my mind of this, I passed the time on the flight counting the cliches in the in-flight movie Super 8.  I lost track after "Kids know best", "Misunderstood Alien isn't so bad if you just talk to him nicely", "The Army is not to be trusted", "Dad's don't understand teenagers", "The misunderstood town scoundrel just wanted to say sorry" and "Hippy guys are nice guys but can't be relied on in a crisis" was all it took for me to look for more entertainment.

I passed some more time by counting how many people made it past 10 minutes in 'Tropic Thunder' (none, all 3 switched over after the opening scenes) and then made it through the decent but slow paced 'Gran Torino'.  'Last Night' was all I could cope with- and before I knew it - 9 hours after chewing through that tea, we'd touched down and I was being treated like another suspected criminal entering US customs at Newark with just minutes to spare to catch my connecting flight (the one that will come as a big surprise to NetFlights and their 'Direct Flight Search tool') to Ohio.

At 8pm local time and 1am in her majesty's kingdom, I'd arrived to a cool, wet, dark Cleveland night.  A brief taxi-ride to the hotel, and I'd finally made it!
Posted by Dave at 02:41

Email ThisBlogThis!Share to TwitterShare to FacebookShare to Pinterest
Labels: ASL