Other bits and pieces

So, before I get into the next couple of games, let's show you some other random assortment of fun photos and various goings on here:

Firstly, check out these funky gadgets (left).  Steve Pleva gives these to players who give him a really tough game where he has to think so hard to grind out the win that it hurts his head.  He gave me two.

Actually, I'm just kidding, I think he gives them out to anyone who asks nicely when he plays them, and he asked me to pass one on to my regular opponent back home.

Any ideas what they do?  These little rascals are for testing vehicular bypass widths.  Place them on the hexside and look through the hole.  You see some obstacle, it's blocked.  Ingenious, and much easier than the suggested approach of trying to look down the width of a counter thickness. 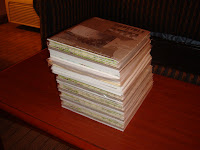 Next up is a picture of the amount of stuff that Derek's bringing back with him for his crew.  There's 5 copies of Crucible of Steel in there, and goodness knows how many regular scenario packs.  That stack was actually so heavy it won't actually balance when upright, it kind of slides right off - I'm not kidding, we took that picture just before it started to collapse under its own weight.  There's probably close to $1250 worth of ASL just there!

Talking of CoS, here's one of the various monster scenarios that are going on around the room. This one is Flying Turrets, from the newest pack from the Bounding Fire Team. There are around 60 tanks on each side - 40 or so T34s which are supplied in counters in the pack.  These guys were on turn 2 for about 2 hours, the last time I checked!
There's talk of a free bar downstairs now, so I'm off to check that out.  Tune in next time to hear about my double chance of winning one of the latest Schwerpunkt scenarios, Hussars and Hounds - one of which was against a very real General of the US Army!