The lessons we learn 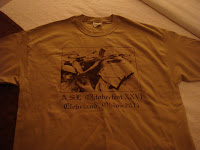 So, it's Saturday, my last full day here and almost time to wrap up and go home.  I'll do a wrap up post before the end, but here's some more weird and wonderful pictures from the wacky world of ASLOK.

Firstly, the T-Shirt - coming in a funky tan colour this year, featuring the Australians in action on the front.  On the back is a list of all the various mini tournament winners, including our very own Derek Cox, who as an accountant, was pretty chuffed to win the "Foreclosures" mini (I've no idea...) last year.

He's known to be so happy with his name in lights that he's threatening to buy one each for each of his children.  Thankfully for them, they might be in for a decent present next year - Derek unfortunately lost in the final of the Action Pack 8 playtest mini this morning. 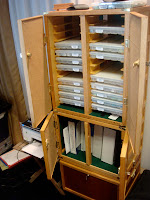 Here's a picture of Jack Daniel's 'ASL furniture'.  Jack's quite the carpenter as you can see below.  He's also known to make folding game tables - without the legs, to hold everything in place whilst you play.

The photo doesn't really do it justice but you get the idea here.

I've no idea how this arrives (or is even assembled) up here in the hotel room (the tournament sits up on the 6th floor of the hotel in what's a very large ballroom like area).

Next is the funkiest piece of ASL gear I came across - the panzerfaust wielding Buddha. Clearly the double-one on the dice finish it off!

You can't actually see on the photo, but there's the full German instructions on that PF too.  Crazy!
Lastly on my little tour, here's the largest dice tower I came across.  You can't really appreciate the scale here but it must be close to 2 feet in height!

It kind of clonked its way through a dice roll but no question about the randomness it delivered...

Today I was in the Tommy's Mini tournament, and paired up with Chuck Hammond.  Chuck is one of the SoCal group that published the Melee packs and he's designed a few scenarios including Marsh Madness and A Worthy Adversary.  He also helped design Eddie Z's Berlin Red Vengence. He was in the running for the Grofaz for a while yesterday so there was a question as to whether our game would go ahead, but he lost out on that game, so pitched up to play me in the British mini.

Chuck has it all.  With charisma, intelligence, witty and dice that'll bring tears to your eyes he's a funny guy that's great fun to play. But, jeez - that guy can roll low dice! His only weakness is the Scottish accent that he thinks he's perfected based on some commercial he saw on tv.  I didn't like to be rude (you know us English!) so I told him it was very good.  I suppose it was if the Scots talked like Welsh daleks, who've had a little too much whiskey. He's a German philosophy professor so if you take a moment to picture what you think he'll look like you might be surprised to see the reality (I don't have a photo yet of him, but I may be playing him again tomorrow - so he won't get away too easily next time).

The choices were Going to Church, Baw Drop or Hussars and Hounds.  I couldn't face playing that scenario for a third time, and Going to Church is a bit long in the tooth.  We decided to play Baw Drop and so for the second time in the tournament I was playing the same scenario, as the same side again.

Chuck's a canny player and despite a valiant attempt my Japanese couldn't get through his retreating British screening tactics. The feeling in the room was that the scenario was pro-British, and Chuck's dice were hot throughout.  All week, and for a few months now, I've tried really hard to smile about bad dice because if you get grumpy about it, that's how players remember you.

We went down to the adjoining restaurant for lunch, (buffalo wings and a burger) - which Chuck kindly treated me to. We chatted about the education system, house prices, the various ASL clubs and tournaments around the world and, of all things, Zombie movies.

Chuck was a very fun guy to play against though, so I had no gripes at all about the defeat.  He was a strong player and I hope he'd enjoyed the game as much as I had.

As is customary at ASLOK, the organisers put on a 'pizza party' which is free beer and pizza for those quick enough to get their slices onto the plates.  It was a welcome break and as it was being organised it gave me a chance to hook up with a game with Mark Pictavage.

Mark, "Pitman" to many, is a formidable force on the forums.  He runs an amazing web site that all ASL players are familiar with, Desperation Morale. Mark is known for opinionated comment and sometimes it is perceived as a little bumptious.   I was keen to meet with him, talk to him and to get to know him some more.

Mark has a fascinating job, which involves educating the various law enforcement agencies in the US about extremism.  He's often quoted in the press and is used in interviews around the country for opinion and educational services.  As Mark explained, it's a little bit like the hurricane experts - they're only wheeled in when bad things happen - so it can be a tough role to fill.

Mark comes across as a well educated, polite and unassuming character.  He's quietly spoken and it's hard to see the posting style that he's know for come across in person.  He's also funny and a pleasant guy to be around.

We picked something from his play list, funnily enough a scenario from the Melee pack that Chuck had previously been involved in.  'Just a bit Outside', MP15, sees the US defending against Japanese with an ever-funneling approach across a ford, on board 37 with the large PTO overlay working its magic.

The victory conditions are that the US must have more good order points in infantry over the stream which is at the rear of their defence than the oncoming Japanese.  It's infantry only, with the US having 80mm OBA to support their position.

It's hard to say how badly I messed this one up, so I'll go quickly.  Effectively it was the last turn of the game.  I'd been slowly retreating back across the board, avoiding close combat and digging away at the Japanese as they sneaked across the map.  The 9-2 leader was rallying everything that self broke back to him and was a forceful fire group whenever the Japanese dared come into sight.

In terms of points over the stream - I had about 13, with 4 more coming back over the stream, albeit broken but heading towards their rally point for a probably 17 or so points.  I'd estimated Mark had between 13 and 15 - but it was hard to say how many.  With just the Japanese player turn to go, my OBA finally contacted and was in with a chance to be brought down.

There was a spot where, if it was accurate would almost certainly win me the game, preventing two squads from coming across the river and with the possibility of a drift, it could even hit up to 4 Japanese locations to guarantee a win.

If the OBA was inaccurate (on a dice roll of 4,5 or 6) then there was simply 1 direction I had to avoid - what's the worst that could happen?

Well, you can guess. OBA was inaccurate, just don't roll a 5!  I don't have to write what happened next, but I will, so that some day if you're in the same position, you won't do the same as me.   I rolled a 5.  So now the OBA comes down on my own hex, overstacked thanks to the luckless routing troops, which if rallied (on a 11 next turn!) simply win me the game.

Mark's a decent guy and I'm glad I got to play him.  I'm gutted that I robbed myself of the win (it turned out Mark had 13 points over the stream) but, bah - you live and learn - I hope!
Posted by Dave at 04:43